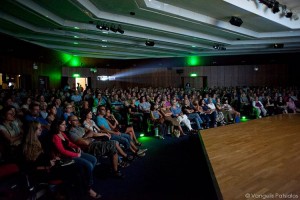 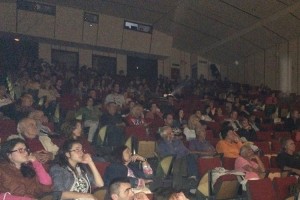 The AegeanDocs2 Festival, which took place in 2014, surpassed the organizers’ expectations and planning. 101 films were shown in 18 theaters in 11 different islands, with thousands of viewers coming to see them.

The identity of the 2015 Festival:

– It’s a multi-local and multi-island festival and it also has an online presence.

– All the conversations the audience is going to have with the films’ directors are going to be broadcasted via HD live streaming from the Festival’s central venue in Mytilene to theaters located in 6 other islands.

– The Festival will also take place in Athens this year in the form of an AegeanDocs week, with 12 films shown in two theaters (Alkyonis and Studio).

– The Festival will take place during the whole year, from November 2014 to September 2015 at the islands. In particular: Lesbos: 9 film screenings in Mytilene, 9 in Methymna and 9 in Eresos. Chios: 8 film screenings on the 1st, 2nd and 3rd of December. Samos: 16 screenings Psara: 16 screenings Fourni: 14 screeings

– The Festival is rich in educational content, collaborating with the University of the Aegean, and it welcomes pupils, university students, teachers and professors. It offers film screenings during the morning so that it can accommodate group visits from schools, in cooperation with the Ministry of Education.

The audience the festival is addressed to:

Media that promote the Festival:

Festival, promote it and offer their help to establish it.

regional channels in Attica and the North Aegean.

total. The Festival’s new sponsor for 2015 is going to be OTE TV, which is gaining

– Newscasts of the following channels will host features on the Festival, like they

NERIT will broadcast nine ten-minute long features on the Festival, like it did in

2013 and 2014. Each feature is going to be shown twice, thus bringing the broadcasts’

-As agreed in October 2014, features on the Festival are going to be broadcasted at

Watch a NERIT broadcast about the Festival: https://www.facebook.com/video.php?

broadcast 30 seven-minute long features in order to inform people about the Festival.

Watch a sample of the features TV Mytilene and Alithia TV broadcast: http://

AegeanDocs collaborates with major radio broadcasters such as ANTENNA FM,

stations of the Northern Aegean.

There are 24 press releases in general on all of the Festivals subjects and thematic areas.

Some links for extensive features about the Festival on the press: