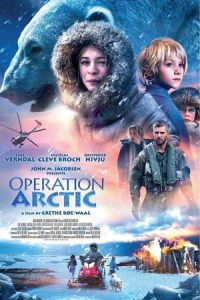 The adventure of three children who are forced to survive on a desert island in the Arctic. In their quest to meet their father, they live a unique adventure against the backdrop of white landscapes, untouched nature and rare Arctic fauna.

The film addresses a number of environmental issues such as global warming, melting ice and wildlife survival. At the same time, issues related to family relationships, bullying and the ability of children to respond to difficulties and find solutions to problems on their own are raised.

It includes unique cinematic shots and aerial photographs of magnificent fjords, snowy landscapes and huge icebergs. The film was shot in Canada and on the Svalbard Islands in the Arctic Ocean, located between Norway and the North Pole.

The story of the film is based on the novel of the same name written in 1971 by the Norwegian author of children's books Leif Hamre.

The screening is suitable for children from 8 years and up and will be subtitled in Greek.